The  ceremony started at 4:30 pm and was presided over by Leif’s brother Matt Summers. After a 10 minute wedding ceremony, guests transitioned to the inside of the barn where they enjoyed cocktails and appetizers as the bridal party posed for photographs. At 6:00 pm we formally introduced the bridal party into the ballroom and then toasts were offered by the best man and matron of honor prior to dinner. Dinner was prepared by the culinary staff at Medure’s Catering from New Castle and was served buffet style.

After dinner, Stephanie and Leif fed each other their favorite donuts in lieu of a wedding cake. The newlyweds then shared in their  first dance together as husband and wife to a song written and performed live by groomsman Russell Womack. Throughout the remainder of the evening, guests danced to the sounds of DJ Pifemaster until the wedding reception ended at 10:30 pm. Here is the music that Stephanie and Leif chose for each of the formal events: 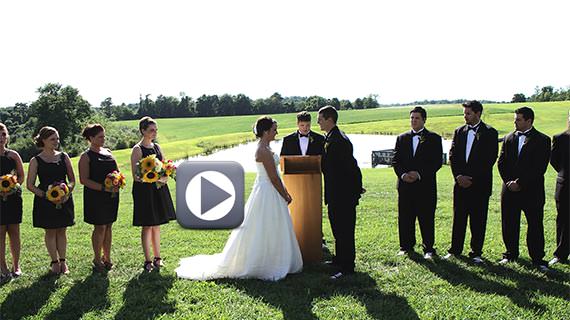