On Friday October 26th 2012 we were at The Grand Hall at The Priory in Pittsburgh Pennsylvania. The event was a wedding reception for Mike and Tina Ostronic. Tina and Mike were married at 4:00 pm at Saints John & Paul Church. Guests began arriving to the Grand Hall at The Priory at 6:00 pm where they enjoyed cocktails and appetizers as the bridal party posed for photographs.

Shortly after 7:00 pm we formally introduced the bridal party into the hall and then Tina and Mike cut their wedding cake prior to dinner. Dinner was prepared by the culinary staff ath The Priory and was served sit-down style. After dinner guests danced to the sounds of DJ Pifemaster until the wedding reception ended at 11:00 pm.

Here is the music that Tina and Mike chose for each of the formal events: 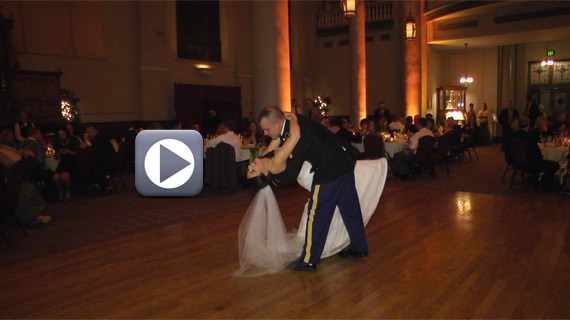