On Saturday June 06, 2015 we were at the East Butler Fire Hall in East Butler Pennsylvania. The event was a wedding reception for Carrie and Michael. Carrie and Mike were married at 3:00 pm at the First United Methodist Church in Butler. Guests began arriving at the East Butler Fire Hall at 4:00 pm where they enjoyed cocktails and appetizers as the bridal party posed for photographs with Jeff Hartzell of Jeff Hartzell Photography.

At 5:45 pm we formally introduced the bridal party into the hall and then Carrie and Mike played The Newlywed Game. Next, toasts were offered by the best man and maid of honor and then Mike’s uncle Dean read a “Top 10 List” of reasons why Carrie and Mike make a great couple.

After dinner, the newlyweds cut their wedding cake and then shared in their first dance together as husband and wife to the song Then by Brad Paisley. Next, Carrie danced with her father and then Mike danced with his mother before we opened up the dance floor. Throughout the remainder of the evening, guests danced to the sounds of DJ Pifemaster until the wedding reception ended at 9:30 pm.

Here is the music that Carrie and Michael chose for each of the formal events: 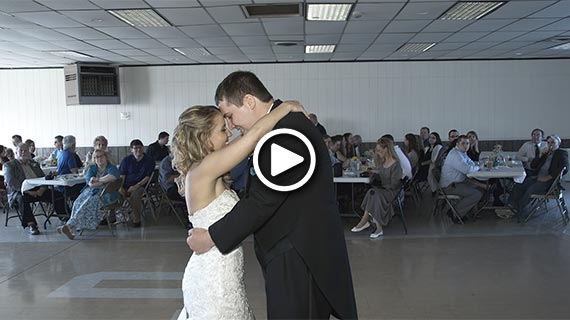