You have to check out the video below, of an awesome toast that was given by Kristen on August 02, 2014 at Shakespeare’s at Olde Stonewall in Ellwood City, PA. It was her sister’s wedding and Kristen was looking to do something different for her toast. She decided to rap her toast to the theme song from the Fresh Prince of Bel-Air. What she pulled off was incredible. Here are the lyrics that Kristen came up with:

Now this is the story all about how
Marla ended up in a wedding gown
I’d like to take a minute, just sit right there
I’ll tell you how our couple met and became the perfect pair.

In Ellwood City, born and raised
Shaking pom poms, is how she spent most of her days
Marla was smart, making A’s through school
Never in trouble, she followed the rules

Commencement came, the choice was clear
It’s IUP for the next four years
Toyota was packed and ready to go
Her roommate was Kate, wouldn’t you know

His name was Andrew,
He played ball
He was funny and smart,
Hey this guy has it all!

Over A couple of years, their friendship grew
It wasn’t long before they knew
They wanted to spend their lives as one
And Mr and Mrs Welch they’d become.

He popped the question, she said yes
And Marla went shopping for a wedding dress.
So raise your glass as we say cheers
To Marla and Andrew and for many happy years! 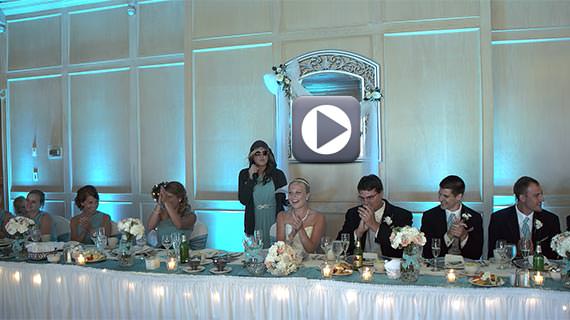